A downloadable game for Windows

I made this game in 5 non-stop hours.Damn.

How 2 play:
Arrow key to move, Z to shoot bullet.Waiting for the power gauge to fill will allow you to shoot a powerful charge shot!

Gimmick:
When the enemy shoots the black bullet, it will turn the tile black.If you step on the black tile, your moving speed will be lowered.Dodging enemie's bullets is very difficult in this situation.However, once you defeat an enemy, the explosion caused by its death will turn the blackened tile back to white again.
You are running out of space!
Tips:The normal enemy will always run towards you after hitting the wall.You can try the manipulate their movement by using this property!

Hard mode:
Pretty much the same as the normal mode, but once you stepped on the black tile, you'll also suffer from constant HP loss...making it VERY difficult.

Pacifist mode:
You can't attack, the enemy won't respawn...just survive as long as you can.

God mode:
Infinite charge shot, black tile barely slows you down...the boss might be stronger, but it's not a problem in this mode.You also have 5 times the HP.
However, there's no score in this mode. This is what you get for playing the CAT GOD.

I also includes the soundtrack for this game in the file!And if you like those songs, be sure to check out my Youtube channel:

I mainly made English  Vocaloid songs. Subscribe if you liked them!

Unzip and have fun ! 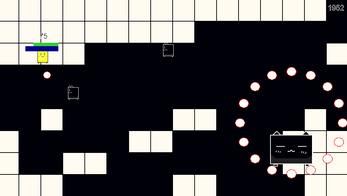 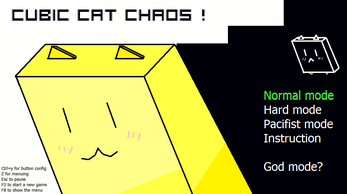